The Carnival Victory is getting a makeover and coming out of dry dock as the Carnival Radiance!

Updates include some of the latest bars and pubs, sports activities, spa amenities and dining spots — like the first-ever Big Chicken restaurant at sea, serving up favorites from Shaq, Carnival’s Chief Fun Officer, and huge fried chicken fan!

Big Chicken is among the many new culinary and beverage offerings that will be available on Carnival Radiance when it debuts.  Other outlets include Guy’s Pig & Anchor Bar-B-Que Smokehouse developed by Food Network star and longtime partner Guy Fieri, a classic American steakhouse called Fahrenheit 555, the Cucina del Capitano family-style Italian restaurant, and the Caribbean-inspired RedFrog Pub.

An expansive new WaterWorks aqua park featuring the new AquaTunnel slide as well as a SportSquare open-air recreation complex with a suspended ropes course will be added, as well.   All of the ship’s staterooms will be renovated with a tropical color palette and striking new décor. 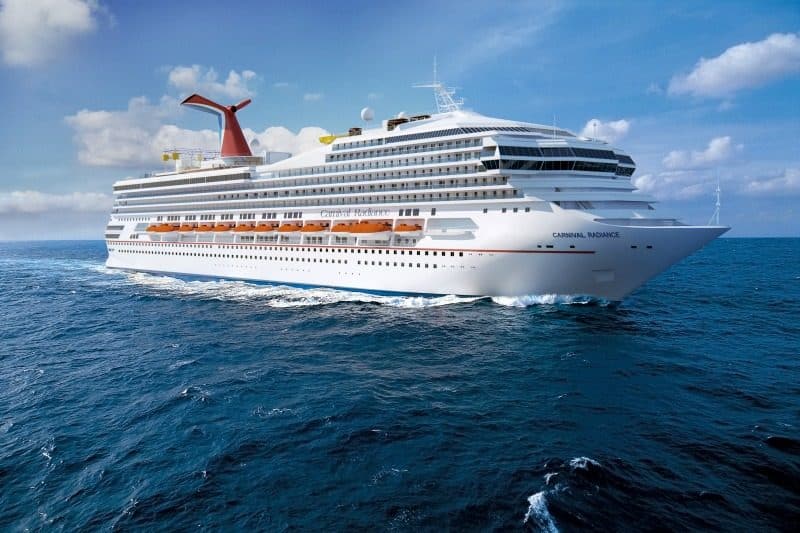 Carnival Radiance will be the first cruise ship to feature “Big Chicken,” a seagoing version of a new restaurant created by the line’s Chief Fun Officer, NBA Hall of Famer Shaquille O’Neal.

The menu will feature a mouth-watering variety of fried chicken sandwiches and fries, with flavors to match Shaq’s larger than life personality, all free of charge.

Located aft on Lido Deck, Big Chicken will tantalize vacationers’ taste buds with a delectable array of fried chicken favorites, all developed and taste-tested by the NBA Hall of Famer himself based on his own recipes.

A variety of fried chicken sandwiches will be featured, with playful monikers inspired by Shaq’s litany of clever nicknames for himself, along with his own take on traditional sides.

Breakfast will be offered as well with choices like chicken and egg biscuits that serve as the perfect morning accompaniment.  Service is a breeze, with patrons placing their order at the counter and picking up their items right away – no waiting and best of all, it’s free.

These experienced mariners and passionate leaders will oversee a team of more than 1,000 team members and include:

The third in the line’s Sunshine-class, Carnival Radiance will make her Southern California debut on Monday, Dec. 13, kicking off a year-round schedule of cruises to Baja Mexico from the Long Beach Cruise Terminal. On this route, three-day cruises depart Fridays and visit Ensenada, Mexico, while four-day cruises sail on Mondays calling at Ensenada and Catalina Island.

Carnival Radiance features all of the line’s popular Fun Ship 2.0 dining, beverage and entertainment spaces as well as Big Chicken, a casual poolside restaurant created by Carnival’s Chief Fun Officer Shaquille O’Neal that debuted on Mardi Gras earlier this year. From new dining choices such as the Cucina del Capitano to expanded entertainment venues like the multi-purpose Liquid Lounge and one of the largest and most luxurious Cloud 9 Spas at sea, Carnival Radiance will offer an abundance of ways for guests to Choose Fun from the West Coast.