Delicious German Apple Pancake recipe that is great for breakfast/brunch. Cinnamon apples are baked with a delicious batter to make a killer puffy pancake. 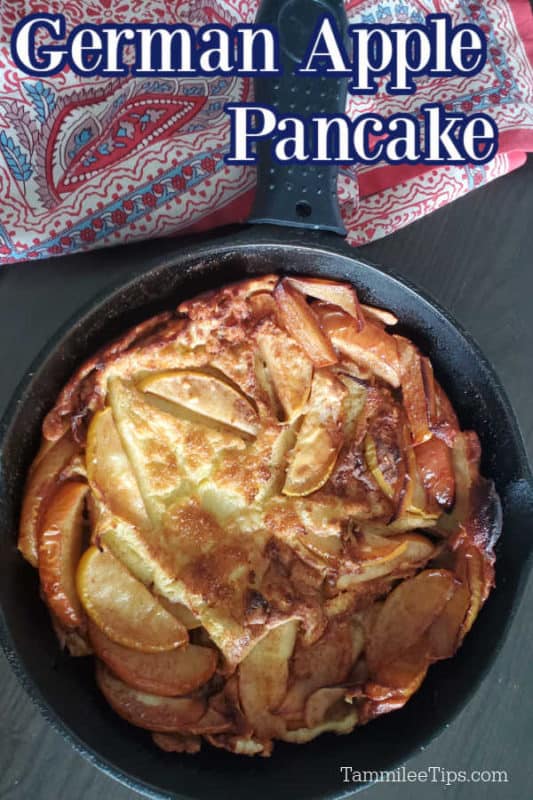 A few years ago we spent a long weekend exploring Walla Walla, Washington. One of our favorite Walla Walla restaurants was Maple Counter Restaurant. I had the most amazing German Apple Pancake while we were there.

I have been trying to remake this restaurant favorite ever since our visit. Finally, I am happy with this Apfelpfannkuchen German Apple Pancake.

While I can't pronounce it very well even with a couple of years of German language study way back in High School I can say it tastes amazing. High school German was over 25 years ago and the only thing I can remember is Zug which means train.

Thankfully you don't need to speak German to make this epic apple German Pancake. It takes about 15 minutes of prep to get this apple pancake ready and then 20 minutes in the oven and you have a puffy apple Dutch baby pancake that tastes amazing.

If you are serving a large group I would highly suggest making two of these German Apple Pancakes. We can go through one on our own with just the two of us if we are really hungry. There are rarely leftovers when this gets made for breakfast or brunch.

For a fun twist on this recipe check out our Lemon Dutch Baby Recipe. 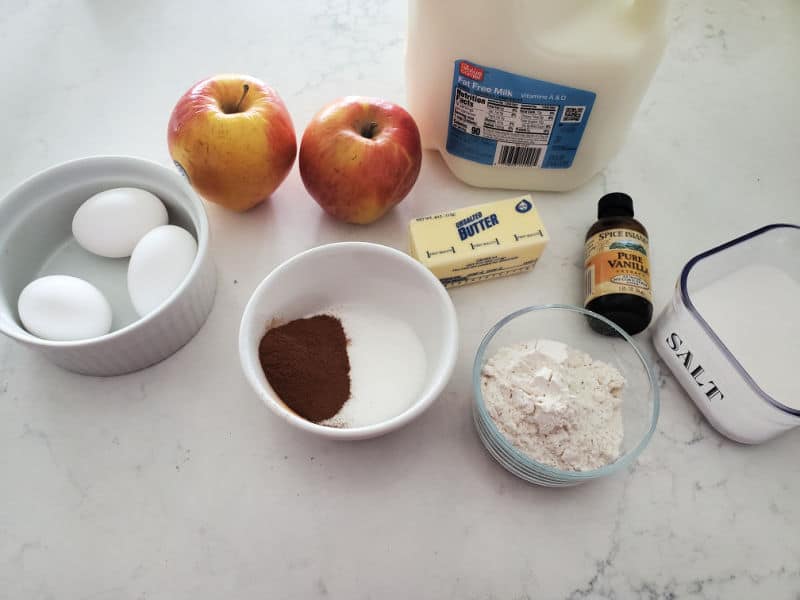 We don't normally add any toppings to this caramelized apple pancake because it is so rich in flavor on its own. A bit of confectioner's sugar does look really cool on top of it.

Apples - We tend to use red tart apples but you can easily make this with granny smith apples or whatever apples you can get in your local grocery store. I try to cut the apple slices pretty evenly so they all bake at the same consistency.

Lemon Juice - you can use lemon juice to sprinkle on the sliced apples and keep them from browning. I tend to skip this step since the apples will be brown and covered in cinnamon sugar by the time they are done.

Large Mixing Bowl - We are big fans of this glass batter bowl that has a handle. It makes it easy to mix ingredients and keeps the mixing bowl steady on the counter.

Cast Iron Skillet - I bake this puffy apple pancake in a cast-iron skillet. I love how the edges get a bit crispy.  You can cook the cinnamon and apples ahead of time and then just pour the batter over the top and transfer it right to the oven.

Heat resistant potholders - A couple of years ago, we had a fire scare when we didn't realize we had turned a burner on, and a cloth potholder caught fire. Thankfully we walked by the kitchen and saw the smoke and were able to get it out ourselves. Since then, we have only used these heat-resistant potholders.

How to make German Pancakes

Step 1 - Preheat the oven, gather all of the recipe ingredients 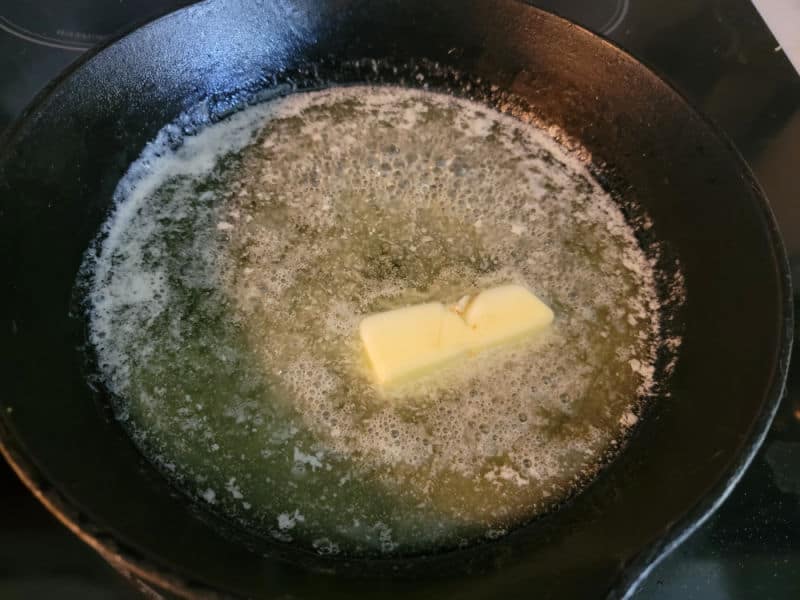 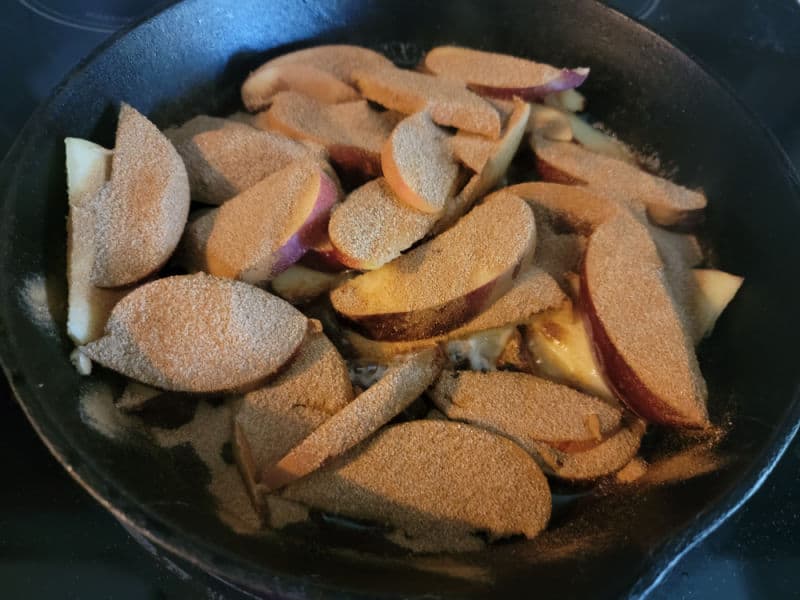 Step 4 - While the apples are cooking mix the German Apple pancake batter in a mixing bowl.

Step 5 - Carefully pour the batter over the apples once they are done cooking. 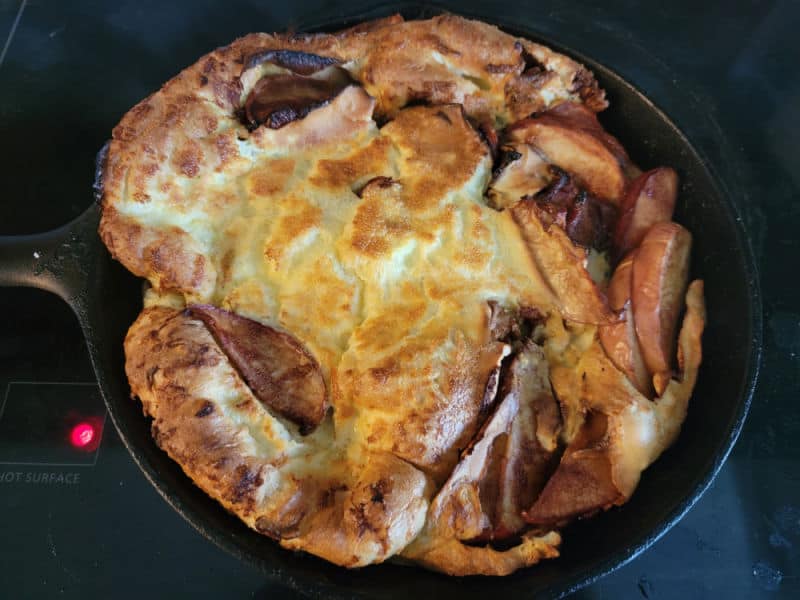 Step 6 - Remove from oven and let cool for a minute or two. The cast iron will be HOT!

Make sure you place a trivet or something to protect your table under the cast iron skillet.

The German Apple Pancake can be inverted onto a large serving dish so you don't have to worry about bumping into the hot cast iron skillet. 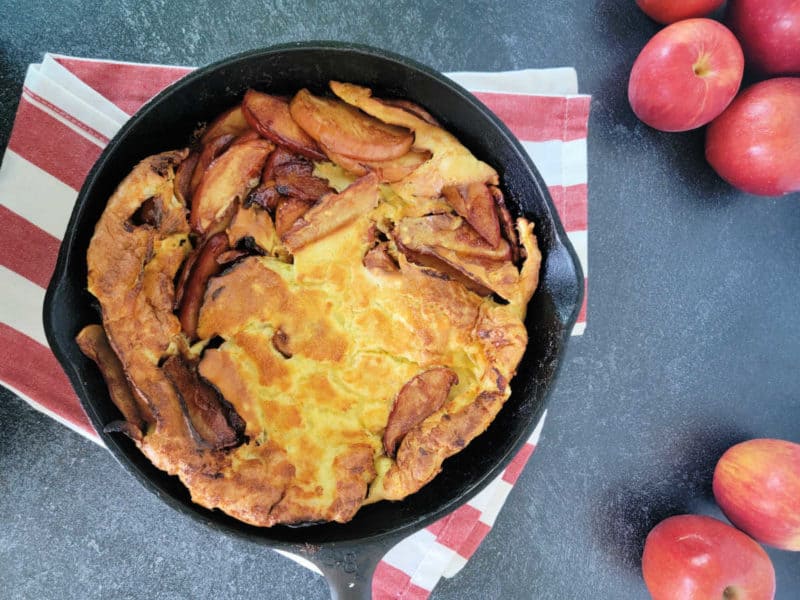 Make sure you have high-temperature oven mitts for removing the cast iron skillet! It is going to be HOT and the last thing you want to do is drop it because it is so dang hot. Trust me I have had to juggle a few of them when our initial oven mitts were not ready for the high temps.

I normally serve the pancake flipped out of the cast iron skillet onto a serving platter. You can also serve it straight from the skillet just be very careful with how hot the skillet is.

Be very very careful if you flip the pancake. Try to use a platter that is much larger than your skillet so the pancake lands on the platter. A couple of times I have flipped the pancake and a portion of it ended up all over the counter. OOPS!

You can top this with a bit of powdered sugar if you like. We tend to serve it with bourbon maple syrup on the side but rarely end up using the syrup because this apple pancake is so sweet on its own. 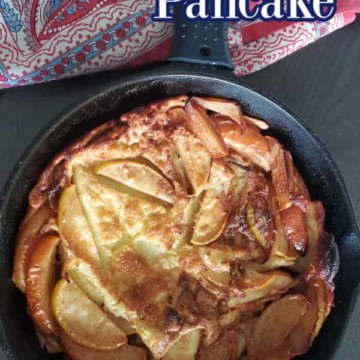