Amazing Crockpot Gumbo Recipe is full of flavor! The perfect combination of sausage, chicken, and shrimp with cajun spices! It takes less than 30 minutes to get this recipe thrown together in the slow cooker! 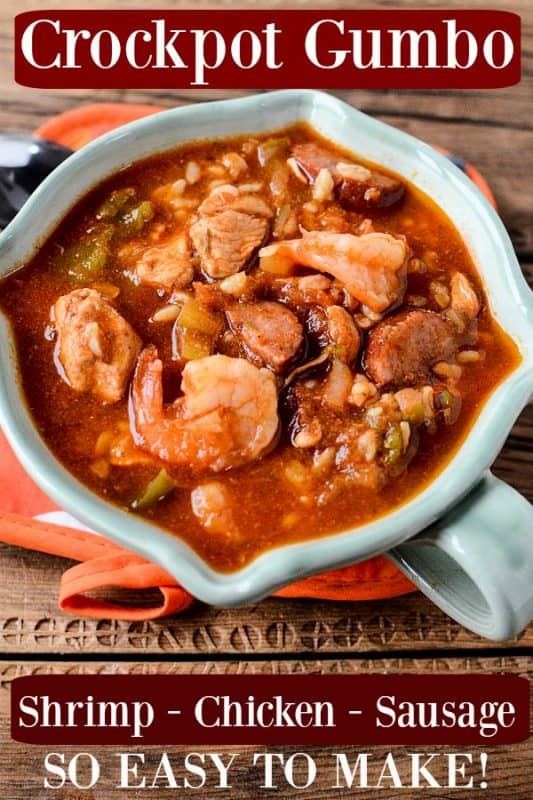 Last year we took an amazing trip to New Orleans and fell head over heels in love with the food! One of our favorite things we did was take a cooking class to learn how to make jambalaya, gumbo, pralines and so many other amazing dishes. Today's Slow Cooker Crockpot Gumbo Recipe with Sausage, Chicken, and Shrimp is an adaptation from everything we learned in class and enjoyed while we were in New Orleans.

Now if only I could figure out how to make a Cafe Du Monde beignet magically appear in my kitchen! Hello yum! Seriously I don't know what they do to make them so good but I could enjoy one right now and love it.

There is just something magical about New Orleans. Ok, parts of it are a bit smelly but that is probably due to all the fun people have on Bourbon St. We skipped partying on Bourbon St. and instead hung out around the French Quarter listening to jazz music, people watching and relaxing. I am so ready to plan another trip to New Orleans soon.

Since we can't hop a plane today for New Orleans instead we will enjoy a big bowl of this Crockpot Gumbo Recipe with sausage, chicken, and shrimp!

Free things to do in New Orleans 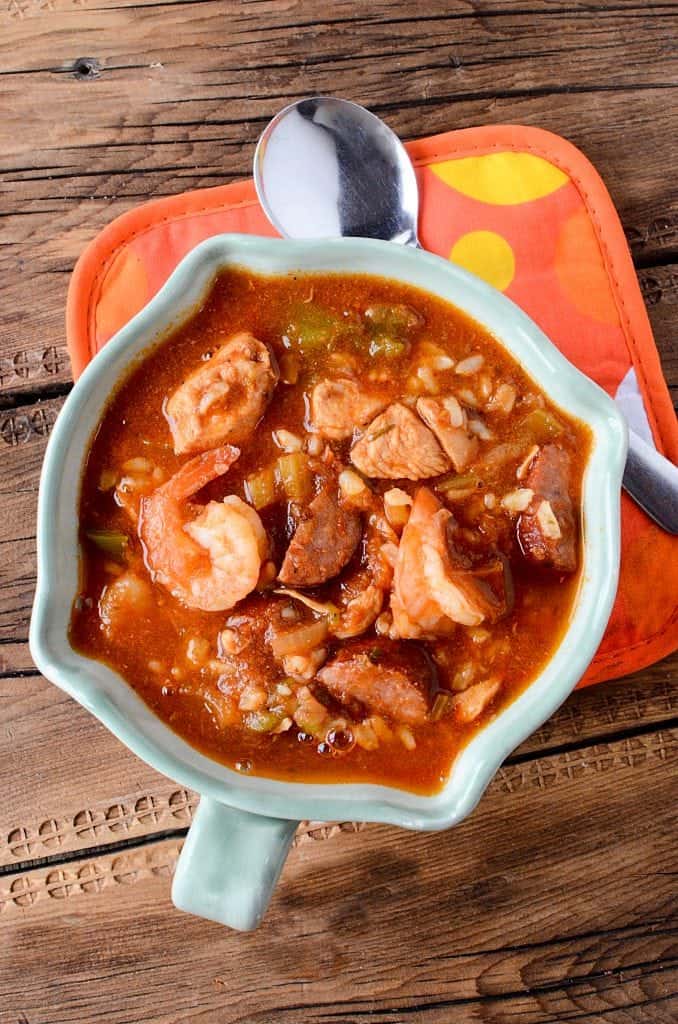 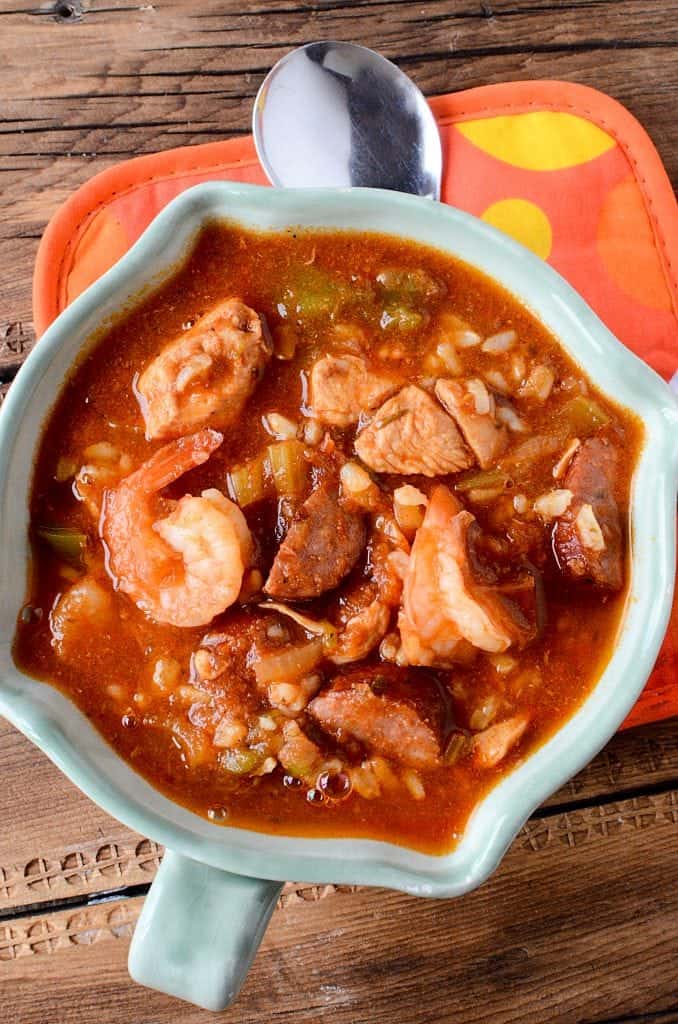 Pin this pic to make it easier to find this great recipe:

What is the difference between Gumbo and Jambalaya?

Visit Louisiana in America's Deep South, and you're sure to come across gumbos and jambalayas of all descriptions. Cuisine in the area has both Creole and Cajun influences, and you'll find versions of both dishes in both cuisines.

Cajun food tends to consist of one-pot meals, put together for taste rather than appearance, and often highly spiced. Creole food is more polished and subtly flavored.

Traditional Gumbo is similar to soup. It's based on a roux of flour and oil. Depending on whether you eat it on Louisiana's Gulf Coast, In New Orleans or Lafayette, it will be thin, medium or thick, the consistency is determined by the use of light, medium or dark roux.

Okra tends to be a common ingredient in most gumbos, which also contains a combination of various seafood or chicken and sausage.

Gumbo is very much an improvised dish, and what goes into it depends on what is available to the cook at the time. There are no hard and fast rules regarding quantities - Creole and Cajun cuisines are art rather than science. Gumbo is always served on a bed of rice.

Jambalaya is a rice dish to which other foods are added, similar to a Spanish paella without the saffron. Creole jambalaya tends to be tomato-based, which is understandable when you realize that most Creoles are descended from French, Spanish and Portuguese ancestors. Mediterranean cookery has always relied heavily on tomatoes, and the Creole version is known as red jambalaya.

Cajun jambalaya is more country style and usually misses out the tomatoes, though some Cajun cooks may use tomato paste as a thickening and flavoring agent. The Cajuns brown the meat to give a smoky flavor to the dish, which is known as brown jambalaya.

Jambalaya is similar to gumbo in that there are no hard and fast rules for ingredient quantities and seasonings. Anything can - and often does - find its way into jambalaya. However, as this is a rice dish that depends on most of the liquid being absorbed, you should use two cups of chicken stock or water to each cup of rice. Chicken and/ or seafood are the most common additions to jambalaya, along with a variety of vegetables.

Jambalaya and gumbo are two hearty, flavourful and inexpensive meals, which can easily be adapted to feed large numbers. Don't think about the differences - just eat! 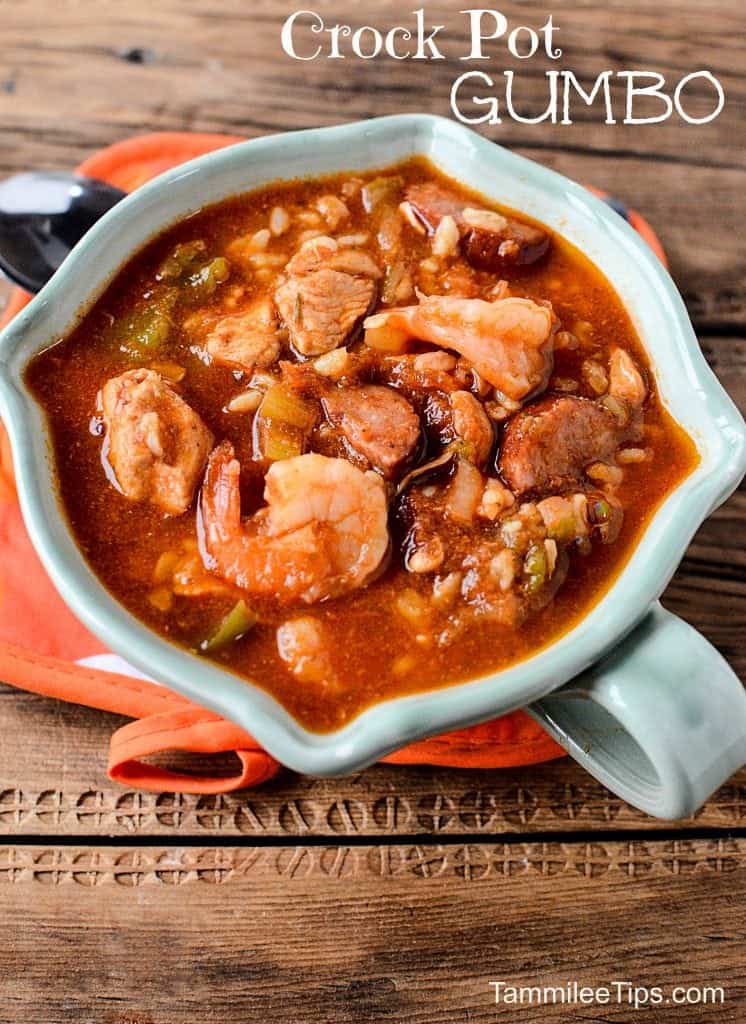 Feel free to add-in Okra, bell pepper, cayenne pepper, gumbo file, or bay leaves if you like these additional flavors. One thing about gumbo is it is truly adaptable for the chef's preferences.

Many people prefer chicken thighs over chicken breasts. Again it is really up to the person cooking the crockpot chicken gumbo.

We have gotten hundreds of emails and comments that Slow Cooker Gumbo is not a traditional gumbo with a roux base. Trust me I have heard you loud and clear but I wanted to create a recipe that made life a little easier for those days when you can't stand at the stove stirring constantly so you don't burn the roux.

We all have those days we want amazing comfort food but don't have the time to spend hours in the kitchen. Heck, there are days I feel like I barely have 20 minutes in the kitchen before we need to run out of the house and get life done.

My goal is not to upset anyone who grew up with a traditional gumbo recipe. One thing I have learned since posting this crockpot cajun gumbo recipe a few years ago is that gumbo brings out a lot of passion in people.

PLEASE know that I did not make this recipe to upset your grandmother or family or anyone who grew up with Southern roots. I made this recipe to share my love and appreciation for southern dishes and to help others who may not have a ton of time in the kitchen but want to make their families an amazing meal.

for all of our crockpot recipes.

Be sure to follow me on Instagram and Tag me at @TammileeTipsLife – I love seeing what you make! 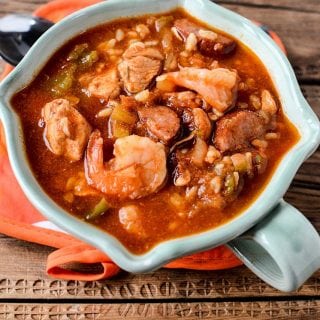 This recipe was originally posted in November 2016, updated January 2020.