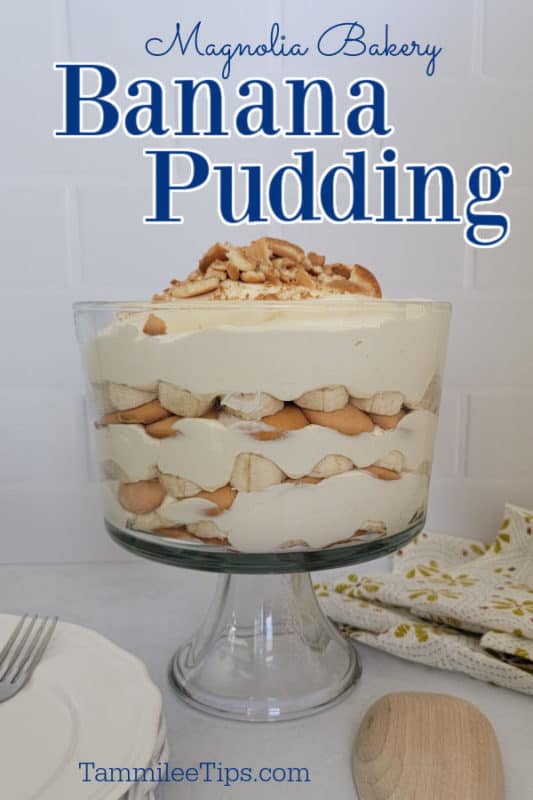 A few months ago, I won a giveaway on Instagram for a Magnolia Bakery gift card and cookbook. As soon as I won, I knew exactly what I was ordering...Magnolia Bakery's famous Banana Pudding!

We haven't been able to travel to New York City this past year to get our Magnolia Bakery fix so it was perfect that we were able to get it shipped to the house.

I surprised John with the banana pudding and to say he was excited is a big understatement. As soon as the pudding was gone I knew I needed to try to figure out how to make a copycat Magnolia Bakery Banana Pudding at home.

I am also going to admit that I also had to order their famous cupcakes. 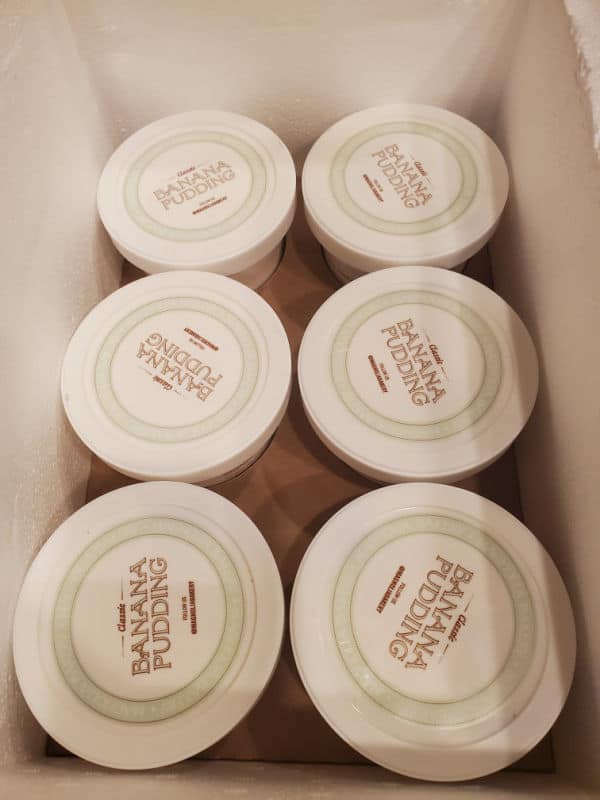 When our Goldbelly order of Magnolia Bakery Banana Pudding came in they had a card with random fun banana facts. I figured they would be fun to share.

The scientific name for a banana is "must sapientum" which means fruit of the wise men.

Americans eat an average of 27 pounds of bananas per person per year.

Bananas are the only fruit that contains the amino acid tryptophan plus vitamin B6 which helps produce serotonin.

Medium Bowl - We are big fans of this glass batter bowl that has a handle. It makes it easy to mix ingredients and keeps the mixing bowl steady on the counter.

Hand Mixer - This will make it a lot easier to combine ingredients and make sure the pudding is smooth. You can also use a stand mixer.

Trifle Bowl - We love how this dessert looks when served in a trifle bowl. You can also make this in a 9x13 pan, a wide glass bowl, or another dish. 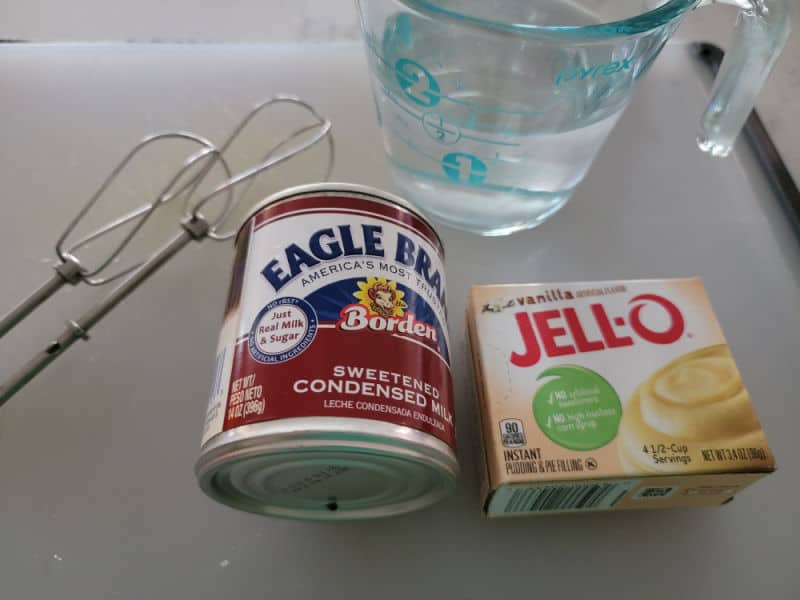 Step 1 - The first step for making this banana pudding is beating together the ice-cold water and sweetened condensed milk together.

You want to combine it until well combined at least a minute on medium speed. 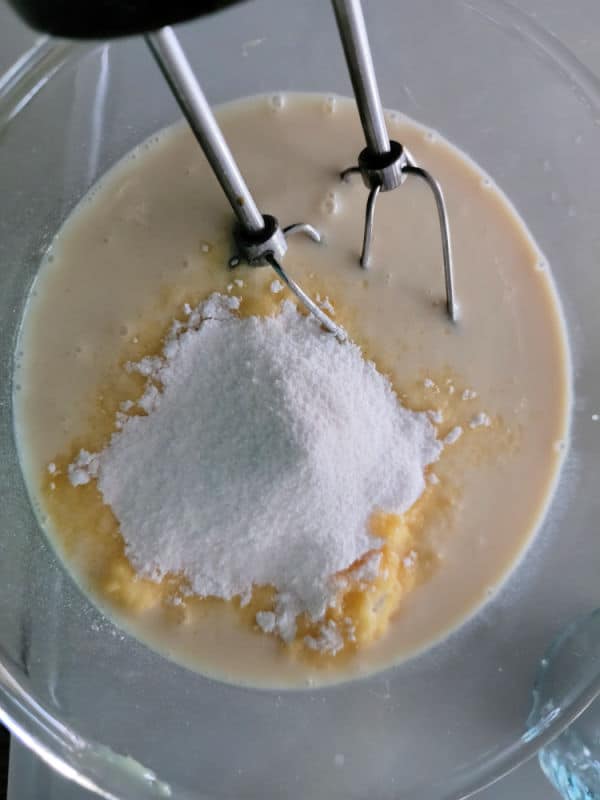 Mix in the vanilla pudding and beat well until there are no lumps.

Cover the bowl in plastic wrap and refrigerate for a minimum of 3-4 hours or overnight. You want to make sure you plan time for this mixture to sit so it can start to thicken.

If you try to use this mixture to quickly it will be really watery and not thick enough to form the banana pudding. 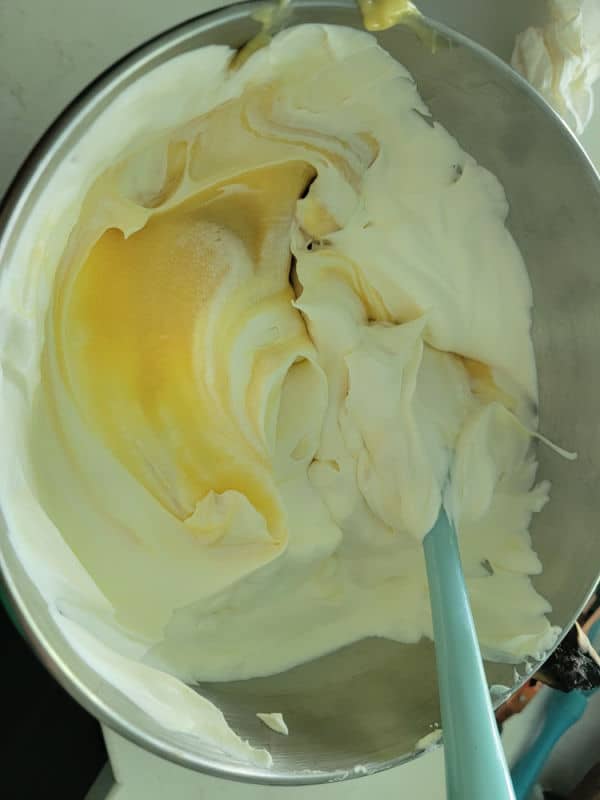 Step 2 - A few hours later or preferably the next day you will want to whip the heavy cream until stiff peaks form.

Once stiff peaks form you will gently fold in the vanilla pudding mixture. Adding the mixture to the whipped cream until no streaks of pudding remain. 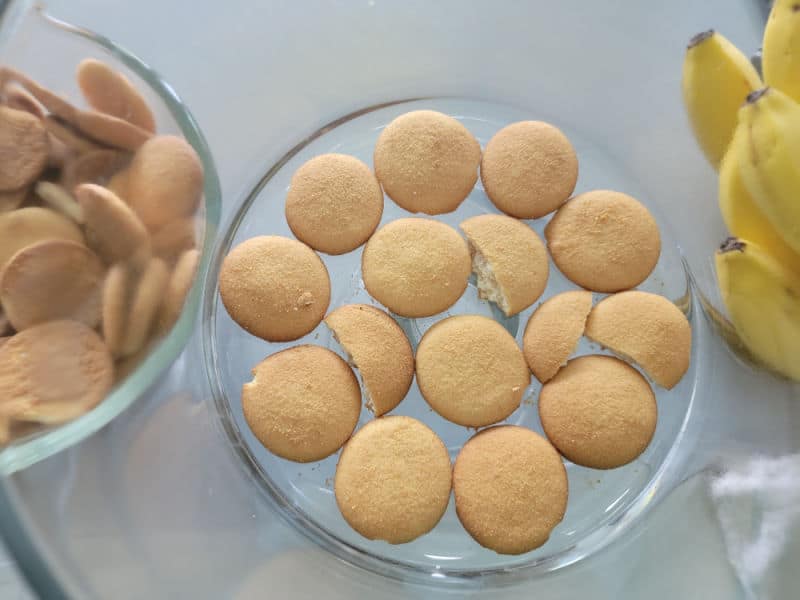 Step 3 - You can use a trifle bowl, baking dish, large bowl, or individual serving cups to serve this Magnolia Bakery banana pudding.

Line the bottom of the dish with Nilla vanilla wafers evenly spread out. 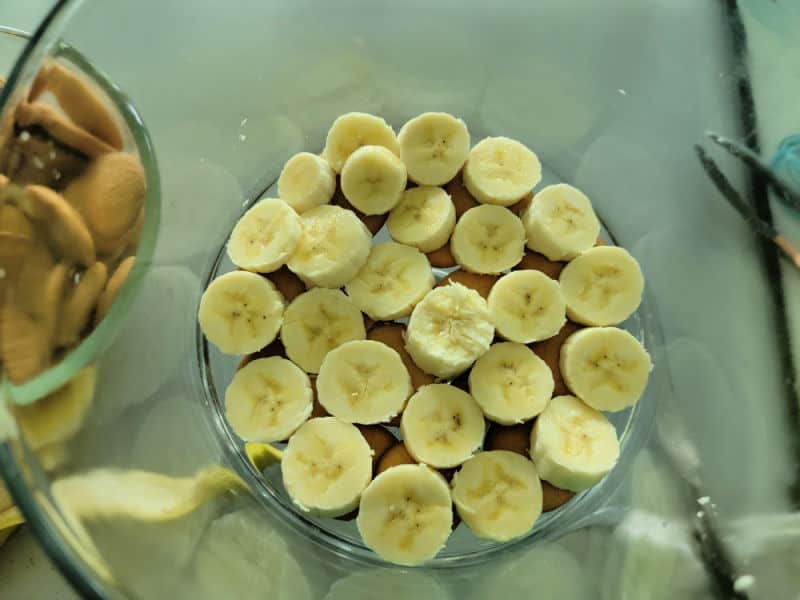 Step 4 - evenly spread slices of bananas over the top of the nilla wafers.

Top with ⅓ of the whipped cream banana pudding mixture. 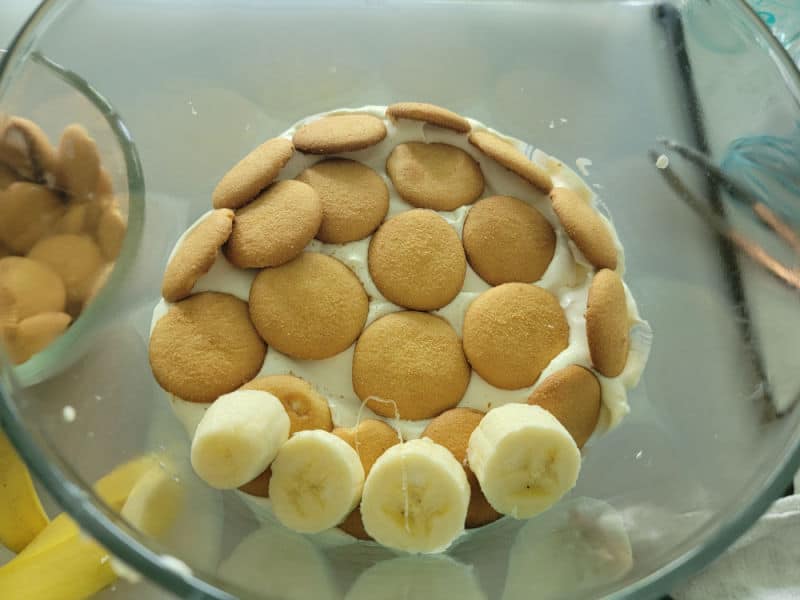 Step 5 - Continue layering the nilla wafers, bananas, and ⅓ of the pudding mix until your reach the top of the dish. 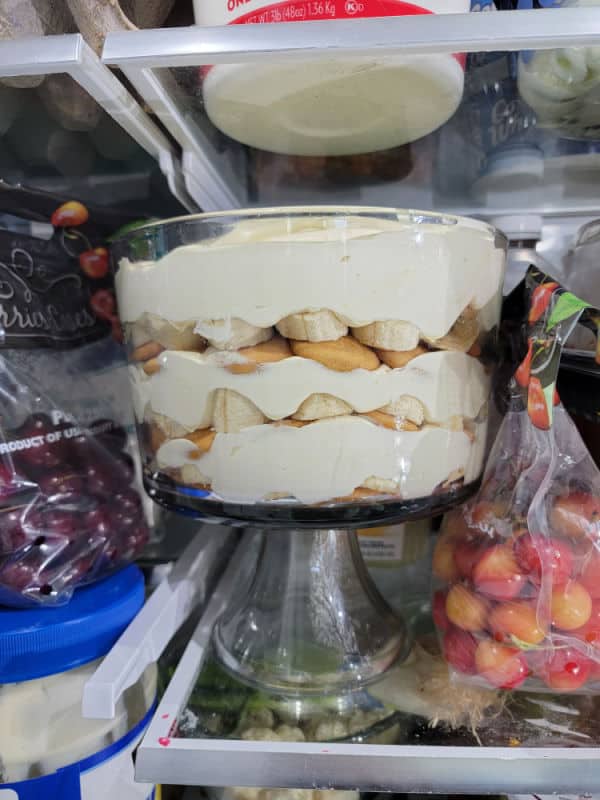 Step 6 - Once you reach the top of the dish make sure the final layer of pudding mixture is at the top. You want to make sure that it is fully covered so the bananas do not turn brown.

Cover and chill in the refrigerate for 4+ hours up to 8 hours. 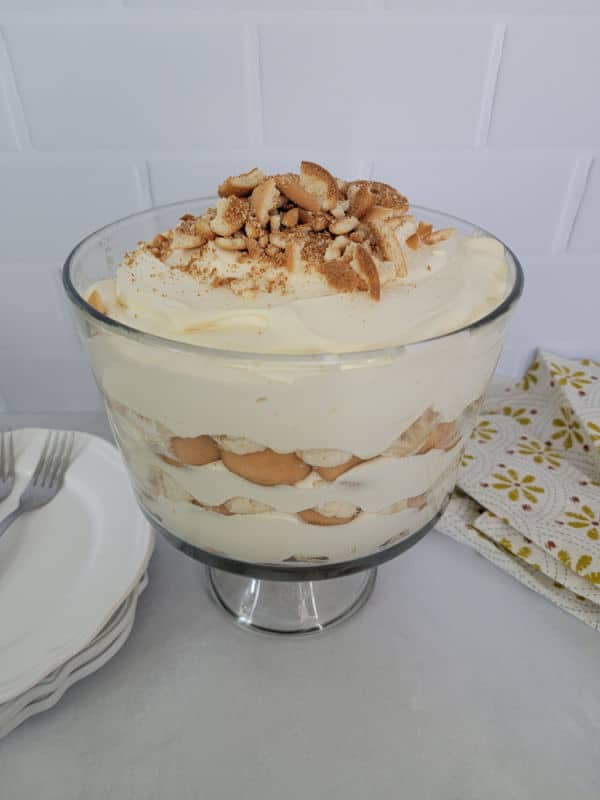 We suggest buying barely ripe bananas so they are less likely to turn brown quickly.

You can brush the bananas with lemon juice to help prevent them from turning brown. We slice them as we are placing them in the trifle dish.

You can spread the pudding over the bottom before placing the 1st layer of nilla wafers if you want too. 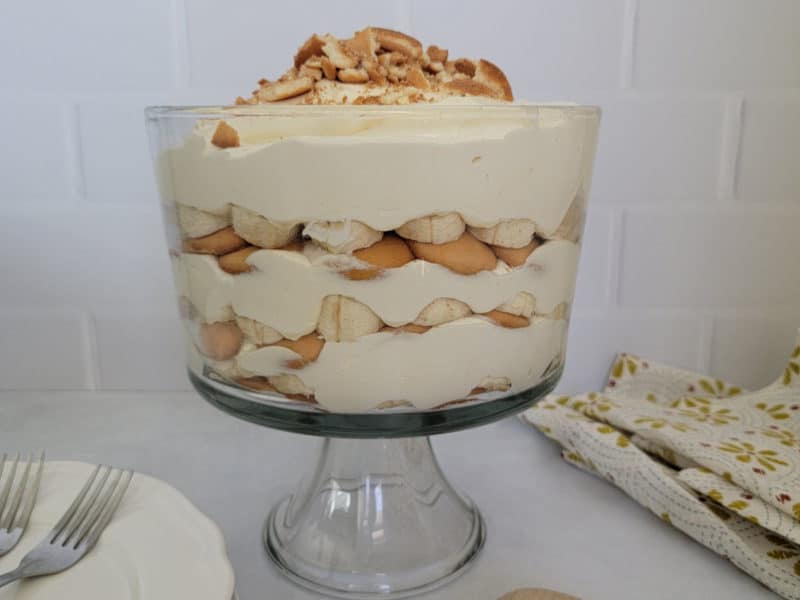 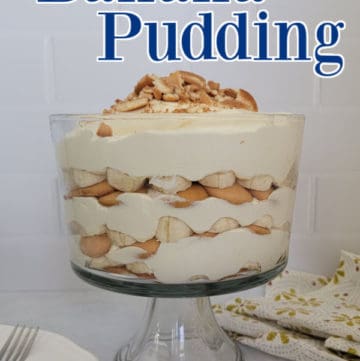